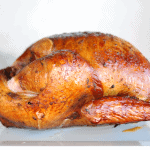 Go rogue for Thanksgiving, Christmas or Easter by making a Bacon Bourbon Smoked Turkey on the big green egg.

Although this turkey is smoked, it’s actually cooked hot and fast over indirect heat. For the Big Green Egg, you’re able to cook indirectly using the plate setter.

It’s a ceramic disk that sits over the coals. This allows the harshest heat to reflect back down, instead of scorching your meat.

After you stuff the bird with aromatics of jalapenos, onions, apple, garlic and bacon, you’ll lay it on the grill grate over a pan of the same goodies and some apple cider.

As the bird smokes, these flavors will be infused inside and out.

Start this bird at a high temp (vents pretty wide open) with the breasts down. After 30 minutes, give her a flip.

Reduce the heat of the Big Green Egg by closing down the vents a bit. Continue cooking until she reaches an internal temperature of 165 F degrees.

Be sure to check the temperature in different parts of the bird. The thighs usually take the longest to cook.

The color is pretty magical. Don’t you agree?