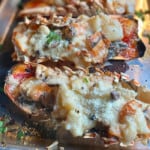 This recipe for Lobster Thermidor is my interpretation of the French classic with a creamy gruyere cheese sauce.

Disclosure Aspire by Hestan compensated me for this recipe.

There are some haters out there who insist that seafood and cheese don’t mix, but come on…lobster mac and cheese is so a thing and sorry to break it to those folks, but so is lobster Thermidor.

Lobster Thermidor a Parisian dish from the late 1800s that involves creating a rich, creamy sauce enveloped with large chunks of lobster.

When making this dish, you’ll cook the lobster twice. First, in it’s natural form and then combined with the sauce.

While you can put the lobster tails directly on the grill for the first cook, I have found a little tip that makes the next step much easier. (see the step-by-step video below)

Using a pair of scissors, snip away the thin layer of shell that rests on top of the meat. Pull it off and discard it.

Then, carefully pull the whole piece of meat out of the shells. Flip it over and place it right back inside.

Now, after it’s cooked, the meat will come out very easily.

I prepared this lobster Thermidor on my Aspire by Hestan Gas Grill. I set the grill to medium heat and placed the tails right over the heat and cooked them for about 10 minutes.

You don’t want the meat to cook all the way through, because it’s going to cook more in the final step. Once it’s cool to the touch, remove the meat from the shells and chop it into large chunks.

I will say having taken a few short courses at Le Cordon Bleu in Paris, the French really know their sauces, and this one is no exception. It’s a mornay of sorts.

Bechamel is one of the main mother sauces, which involves creating a roux with flour and butter and adding cream or milk. To create a mornay, you basically make a bechamel and add cheese.

This sauce adds a few extra pick-me-ups like white wine, shallots, garlic and mushrooms. You can also use a splash of brandy.

Start by melting the butter and sautéing the veggies in a saucepot. I used my Hestan NanoBond soup pot, which is safe to use directly on the grill.

Then, add the flour to create a roux. Add in the liquids and cook, until it’s thickened. Next, add in the cheese. Gruyere is the traditional cheese used in lobster Thermidor, but you can try other mild cheeses like swiss or fontina.

Finish the sauce with some seasoning. I love Girl Carnivore’s Ooomami Blend. It has dried mushrooms in it, which complements the fresh mushrooms.

Finally, stir in the lobster meat and return everything back to the shells.

I recommend placing everything on a sheet pan, in case the sauce oozes out a bit. Add a sprinkling of grated parmesan cheese and bake/grill for another 10 minutes, until that cheese bubbles.

Garnish with some fresh herbs and serve with a crisp white wine. There you have it. You just conquered grilled lobster Thermidor. Julia Child would be proud.

To prepare this recipe in the oven, heat the oven to 350F. For all of the steps where it says to grill the lobster, just place it on a pan in the oven.  If you don't have the Ooomami powder, that's okay. You can still follow the rest of the steps. The powder just makes it that much better.