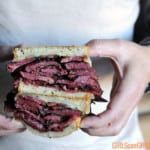 The term corned beef and pastrami are often used interchangeably. There is no shame in not knowing the difference. I was in that camp not too long ago. This website is all about teaching you the things I learn, and what I’ve learned is that corned beef is basically pickled or brined beef. While pastrami is when you take that beef and smoke it.

Probably, the most famous pastrami in the U.S. comes from Katz’s Delicatessen in New York — If you’ve seen When Harry Met Sally and the “booth scene,” you know Katz’s.

The Jewish deli not only corns (pickles) its beef, they smoke it, boil it and steam it. The process takes weeks.

At Katz’s, they use beef navel. This is a cut of beef near the brisket, but closer to the plate ribs. You know…those dinosaur bones I’m always sharing on Instagram. Beef navel is not an easy cut to get at the grocer, and trimming the bones off of dino bones is pretty expensive, so I opted for a different cut.

Recently, I flew to San Antonio, Texas, for Chef Jason Dady’s Titans of the Tailgate. Amazing chefs from around the country come out and show off their one dish and try to woo the crowd. My favorite by far was the pastrami sandwich by Chef Jeff Bekavac.

After one bite, I stalked his tent to try to understand what made this pastrami so different from others I’ve had in the past.

I eventually learned that they corned and smoked a chuck roll. If you haven’t heard of a chuck roll, you’re not alone. It’s not a cut you find in the meat case. The chuck roll is the entire subprimal cut of beef that is broken down into things like chuck steaks, country-style beef ribs and the ever-popular chuck roast.

When I got home from Texas, I called up my butcher and asked for a chuck roll. Mind you, I didn’t really know what that meant, but sure enough I had a nearly 20-pound slab of meat to play with to make cured beef. After watching multiple YouTube videos, I figured out how to break it down.

In the end, I had a lot of cuts and a few 3-pound chuck roasts, which were much more familiar.

To mimic what Chef Jeff did in Texas, I broke down the chuck roast even further. Meat gives you a road map on how to butcher it. Generally, you just follow the fat lines.

For the chuck roast, I sliced it right down the line – like pictured above – and removed any fat that I knew wouldn’t be tasty after it was cooked.

I ended up with two narrow cuts of beef. You should be able to tell from the picture above that the grain of the meat runs in different directions. This is another reason to separate it. In the end, you want to cut the slices against the grain. By separating it, that makes this process much easier.

I want you to take another look at the picture above. Do you notice anything else? You should see the marbling. Chuck is what we use for pot roast and hamburgers. It’s a flavorful cut that doesn’t get the credit it deserves.

You can also use this recipe with brisket, but let’s be honest, brisket is a little daunting. You have to commit to more than a few pounds, it requires a lot more trimming, and after all the work, it can still end up dry.

This is why, from here on out, I’ll make my pastrami with chuck roast.

Pink curing salt or sodium nitrite is the magic ingredient that turns the beef that rosy red color. It’s been used for years to preserve meats. It helps stop the reproduction of bacteria, which is important since this process takes a few days.

As for the pickling spice, feel free to buy a bottle of the pre-made stuff. I on the other hand like to mix up my own blend. I make a pretty big batch, so when I’m not corning beef, I can use it for homemade pickles and pickled red onions.

All of the brine ingredients will get cozy in a gallon of water for a while. You want the salt and sugar to dissolve and the spices to steep. Then, let it cool.

Place that beautifully trimmed up beef in a zip-top bag, and pour in the cooled brine.

As an extra precaution, I always put the bag in a large bowl or roasting pan, because inevitably that darn bag is going to leak. You don’t want beef juice and brine all over your fridge.

Let the beef get acquainted in the brine for 5-7 days. Most people tell you to toss the meat around every now and then for even coverage, but if you don’t, it’s not the end of the world.

After the week of brining, you’ll rinse the beef off and get it ready for the rub.

This rub has similar flavors to the brine, but you don’t need to add any more salt. It starts with a base of black pepper, coriander seeds and mustard seeds. I like to toast them in a skillet to release their essential oils.

Then, add some sugar, smoked paprika and fresh garlic, and pulse them in food chopper for a quick grind. For the sugar, I use coconut palm sugar in my rubs because I like the texture and its slower melt factor, but you can also use granulated, brown, raw or turbinado sugar.

Take those spices and rub them all over the corned chuck roast. Place the beef on a baking rack on a sheet pan and let them rest in the refrigerator overnight, uncovered. This is essentially a dry brine.

At this point, you could boil the chuck roast and make corned beef, but instead we’re going for pastrami.

Fire up your smoker to 250F degrees. Place the rubbed beef on the grates and smoke for 2 hours.

If you only have a gas grill, you could use that too, but turning one burner on and setting the meat over the burners that are off. Just make sure the temp stays around 250F degrees and add some wood chips in a foil pouch to add smoke.

As I mentioned earlier, the pastrami at Katz’s Deli is smoked, boiled and steamed. We’re skipping the boiling, but we will add a bit of steam. After the second hour, add small pans of water to the grill grates. The water will let off steam that will fill the smoker, helping the meat become even more tender and juicy.

I wait until after the second hour for this step, because I want the smoke to be the star at first.

Smoke for another 30 to 90 minutes, until the internal temperature registers between 205-210F degrees. The smaller pieces will be done first.

Once they hit the mark, remove them from the smoker, cover them with foil, and let them rest for at least 30 minutes before slicing.

As with all beef cuts, it’s important to slice the beef against the grain. I slice the larger piece in half and then it’s sliced thin lengthwise.

For a true deli slice, try to aim for an 1/8-inch thickness or less.

I was so pleasantly surprised by how juicy the chuck roast pastrami was. Usually, I hide my pastrami brisket in mustard, cabbage or Russian dressing, because it can be a little dry, but all this needed was some rye bread and a slice of Swiss cheese.

I honestly doubt I’ll ever make pastrami with brisket again.

Want to know my melty cheese trick for a twist on pastrami on rye?

Go ahead and make a grilled cheese sandwich with rye bread and Swiss cheese (without the meat). Once it’s nice and melted, remove it from the griddle. Wait a few seconds, and then separate the slices of bread and pile on the pastrami. It results in perfectly melted cheese and toasted bread every time.