What is Picanha and How to Grill It

What is Picanha and How to Grill It
Picanha is the prized steak cut of Brazil. Learn about its history, where to buy it and a few different ways to grill it from my SouthAmerican BBQ friends.
4.67 from 3 votes
Recipe Subscribe 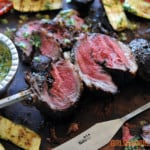 Picanha is the prized steak cut of Brazil. Learn about its history, where to buy it and a few different ways to grill it from my South American BBQ friends.

“It’s literally like cutting a butter stick. Melts in your mouth!”

It’s reviews like this and social media posts from some of my favorite BBQ friends that left me yearning to make grilled picanha.

Picanha (pronounced pee-kawn-yuh) is a beef cut from the upper rear of the cow. It’s the muscle that lies just above the tail at the top of the loin primal.

BUTCHER TALK: Within the loin primal you’ll find the sirloin subprimal, which includes the top sirloin where the sirloin cap is found. In the U.S., picanha is sold by many names, including sirloin cap and coulotte.

When it comes to steaks, I’m a ribeye girl. I love the marbling you get in that cut. I honestly rarely go for the sirloin, because I find it less tender. That’s probably why it’s taken me so long to make picanha.

But I’ve discovered that not all sirloin should be treated the same. The top sirloin is a buttery, tender cut that delivers a delicious, beefy steak. It’s no wonder that Brazilians prize this cut so much.

To really understand picanha, I want to take you back 1,000 years. According to National Geographic, raising large herds of livestock on extensive grazing lands started in Spain and Portugal. When the Spanish explorers ventured west, they brought their cattle-raising techniques with them.

One of those techniques included using a cattle prod, which was called a picana (without the h). The picana was used to herd the cattle. Ranchers touched the cattle with the prod right above the tail to get them to move in the direction they wanted – toward better grazing areas, away from hazards or to areas where the handlers could provide care.

Legend has it that the picanha cut was named after this prod, because the cut comes from the area of the cow the ranchers touched with their prod.

Fast forward 1,000 years and Americans have become familiar with picanha because of the many Brazilian steakhouses scattered about the country that serve freshly grilled picanha tableside.

Where to Buy Picanha?

Assuming you don’t live in Brazil, finding picanha can be a little tricky. I’ve known people who are lucky enough to get it at their Costco, so it’s worth checking there.

If you have a great butcher, by all means ask him or her if they can score one for you.

Otherwise, here are a few online sources to help you out.

How to Butcher Your Own

If you can get your hands on a top sirloin butt, you can butcher your own picanha. Occasionally, I pick up larger cuts from my wholesale butcher and break them down, so I found this video from Sous Vide Everything really helpful.

Picanha can run $12-35 a pound, but top sirloin butt can be picked up for $3-5 a pound. While most of the butt isn’t picanha, you’re still getting a great deal, because you can grind the rest up for lean burgers or dice it up for stew.

I was intrigued by the pointers in this video about the three veins. The butcher recommends trimming away the meat beyond the third vein, because it’s not as tender. Again, you can use that for a burger grind.

How to Season Picanha

There are definitely picanha purists out there who will tell you just to use rock salt – and maybe black pepper. “Rock salt” is surprisingly hard to find in the U.S. If you google it, you’ll find ice cream salt. Don’t use that. It’s not food safe.

The rock salt we’re referring to here is basically large crystals of sea salt. The flake sea salt from Spiceology will work great.

While learning how to grill picanha, I reached out to a few of my favorite South American grilling divas on Instagram – Joana Angélica and Aline Marinho of @Churrasdelas and Carla Di Lorenzo of @chetanitamiami.

The Churrasdelas prefer to grill their picanha unseasoned for supreme juiciness. They said salting it before it hits the grill can take moisture out.

Carla, on the other hand, sprinkles on Celusal Barbecue Salt, a refined rock salt from Argentina. She just dusts it on like a fresh snowfall.

I recommend trying both of these versions at least once.

I happen to be a little biased and like my own Bk Brisket Rub on all things beef, including picanha.

And I add Derek Wolf’s Gaucho Steakhouse Rub – properly named after the cowboys of the grasslands (or pampas) of Brazil.

How to Cook Picanha

Most Americans are probably familiar with the Texas Di Brazil method of cooking picanha where it’s trimmed into thick steaks, thread onto a skewer and cooked on a rotisserie.

The Churrasdelas live in Brazil and have a great tutorial on picanha. Their video is in Portuguese, but you can turn on the English closed captions to get the gist of it.

It turns out Brazilians debate over whether to cook picanha fat side up or down. We have the same debate about brisket in the U.S.

Joana and Aline said some people think cooking fat up will allow the fat to drip into the meat to flavor it. But they prefer to cook it fat down, so the fat protects the meat. (That’s the exact same reason I cook my brisket fat down)

They said, if you cook if fat up, the fat will drip onto the grill and cause flare-ups that can burn the meat. If you cook it fat down, the flare ups will hit the fat, which is fine.

I assumed picanha was always skewered, but both the Churrasdelas and Carla start by grilling the meat whole.

The Churrasdelas score the fat before placing it on the grill, so the fat melts through and you don’t end up with any uncooked pieces of fat. Then, they grill it for 3-5 minutes fat down, and then flip it and cook for another 3-4 minutes.

After both sides get a decent sear, they slice it to two-finger thick sections with the grain. They put the slices back on the grill over high heat and grill them like steaks.

They know it’s time to flip the steak when the meat “cries” or when the juices rise to the top. After another quick sear, they continue cooking the steaks over medium heat to medium-rare, about 15 minutes.

Then and only then, they season the slices with salt and pepper.

Carla, on the other hand, is from Argentina and has a slightly different method. She, too, starts by cooking it whole and placing the fat side down on the grill, but she doesn’t score the fat.

And instead of cooking hot-n-fast unseasoned, she sprinkles it with rock salt and cooks it slow-n-low for about 35 minutes. She recommends keeping an eye on it, because flare ups can happen.

After the flip, she cooks it for another 15-20 minutes to medium rare.

Between learning these two methods and watching the many videos Derek from Over the Fire Cooking has produced on cooking picanha on his churrasco swords, I was ready to cook my first picanha.

I’m so appreciative of great grilling friends. They really helped prep me for my first picanha cook.

I ordered a sirloin cap from Snake River Farms and inspected it to see how many veins it had. I’ll be honest. I couldn’t tell for sure. Take a look and tell me how many you see.

I thought I saw a third vein, but I didn’t trim off the meat after it, and it didn’t matter. Every bite was sumptuous. The only thing I did trim was a bit of silverskin on the meat.

I seasoned both sides lightly with my Bk Brisket Rub and heated the grill to medium high.

I followed the advice of my friends and grilled it fat cap down on the grill for a few minutes and then gave it a flip and cooked it a few more minutes. Move it around the grill if you see flare ups.

Next, I sliced it into steaks and skewered them on my spit.

The first time I skewered them, I goofed and ran the rod straight down the center of the steak. You actually want to fold the picanha into a C shape and then run the skewer through both ends so it keeps its shape.

At this point, I added more seasoning. The two on the end were sprinkled with flaked sea salt and the one in the middle was hit was some Gaucho Steakhouse rub from Derek Wolf.

I let them cook on my Aspire rotisserie for 30-40 minutes, until they reached medium rare.

What I Learned and My Final Picanha Recipe

Instead of photographing my first picanha for this post, we enjoyed the meat fresh and hot, so we could truly experience this delicacy. I’m actually glad I did. I savored every bite.

The texture was similar to a filet mignon with an awesome crust and a little cap of seared fat that added a butteriness that you don’t get with filet.

The method of pre-searing and then grilling on a rotisserie was a win for sure. It helped cook down that fat cap a bit.

For the future, I will make sure that each steak is as even in size as possible for a more even cook. I found the two on the end were a little more done than the center one – probably because they were smaller.

However, if you’re serving a group where some like their steak more well done, cooking some smaller slices is a great idea.

As for seasoning, the sea salt ones were great, but the ones with Gaucho were amazing. We couldn’t stop eating those slices.

So with everything I’ve learned from my friends and my experimenting, I have developed the below picanha recipe that delivers a memorable meal of beef that will melt in your mouth.

Picanha is the prized steak cut of Brazil. Learn about its history, where to buy it and a few different ways to grill it from my SouthAmerican BBQ friends.
Recipe by Christie Vanover
4.67 from 3 votes
Prep Time 15 minutes
Cook Time 50 minutes
Servings 8
Print Recipe Pin Recipe Save Recipe Saved Recipe