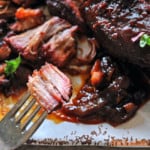 Disclosure: This recipe was sponsored by the National Pork Board. All opinions are my own.

When I was a little girl, barbecue at my house meant country style pork ribs cooked in barbecue sauce in a slow cooker. It wasn’t exactly barbecue, because it wasn’t smoked, but they were still one of my favorite meals.

Now that I smoke and grill just about everything, it’s time to give mom’s recipe a makeover, so it can earn its proper barbecue name.

For mom’s recipe, she browns the pork ribs on all sides and then puts them in a slow cooker with one sliced yellow onion, a bottle of barbecue sauce and some parsley. After several hours, the meat is perfectly fork tender.

This recipe follows the same concept. But instead of browning the ribs, I’ll smoke them for a few hours and then braise them for the same tender, juicy results.

What are country style pork ribs

There are three basic cuts of ribs on a pig: baby back, spare and country style. Spare ribs are then broken down further to create St. Louis style ribs, which are the ribs you see most often in barbecue competitions.

Visit the Pork Checkoff to learn more about ribs and other pork cuts.

Country style pork ribs are cut from meat near the shoulder (AKA pork butt) near the rib end of the pork loin. This cut has a lot of natural marbling, which makes the meat fall apart when cooked properly.

You can buy them bone-in or boneless. I prefer the bone-in. I find they are more flavorful. The bone is not like a traditional rib bone. It’s part of the shoulder blade and usually only runs along one end of the rib.

While mom cooked these in a traditional slow cooker, I’m preparing the recipe using a pellet grill. It’s essentially a slow cooker with wood. You just set the temp and forget it. I like using hickory, pecan or apple wood with pork. I find they bring out the meat’s natural sweetness.

If you don’t have a pellet grill, you can cook these on any barbecue. The key is to set the temperature to 250F degrees with an indirect zone.

While the grill is heating up, season the pork ribs liberally on all sides with Pork Rub. After about 15 minutes, the meat will start to glisten.

We’re going to cook the ribs in two phases. First, smoke them until they form a beautiful bark. This will take around 3 hours, at which point the internal temperature will be at about 170F degrees.

If your temp is 165F or 175F, that’s fine. You’re basically just looking for color at this point.

You could continue smoking them like this, until they are tender, but I prefer to finish them like mom – in a bath of onions and barbecue sauce.

Place the sliced onions in an aluminum half pan, add the smoked ribs, pour on the sauce and cover with foil. It’s really that easy.

How to know when they’re done

Technically, pork is safe to eat once it reaches an internal temperature of 145F degrees. If your country style pork ribs have a good amount of marbling like mine do pictured here, they are much better cooked to 205-210F degrees.

At this point, the fat will render and the meat will become fork tender.

If yours are a boneless or leaner version without much marbling, then keep an eye on them and consider finishing them at a lower temperature.

As it braises, the onions will soften and the sauce will flavor the meat inside and out.

Once it reaches this point, you can transfer them to a serving platter and smother them with that smokey sauce.

Unlike baby back or St. Louis style ribs, you’re going to want to grab a knife and fork for these babies. But if you grab a few pieces with your fingers, that’s quite all right, too. It’s not really barbecue, unless you get to lick your fingers.

What to do with the leftovers

I usually plan to prepare 2 ribs per person (which is about 1/2 pound each).

If you cook a few extra ribs, the leftovers make for great sandwiches. Just pull the meat apart and toss in the sauce. Layer it on a bun with the barbecue onions and some coleslaw.