The No-Fail Way to Make Smoked Brisket
If you've struggled with smoked brisket in the past, read this post to learn tips from grand champions. Includes a step-by-step infographic.
4.42 from 117 votes
Recipe Video Subscribe 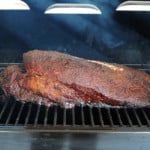 When I first wrote this post in 2016, I had smoked a few beef briskets in my life, and they’d always been good, but not great. So I studied the techniques used by a few BBQ grand champions and BBQ instagram pals, and I’m passing them on to you.

For a summary of this post, scroll to the bottom for a handy infographic.

First of all, the brisket is one tough piece of meat, but when you smoke it just right, it becomes a heavenly slab of beef that yields tender meat slices and melt-in-your-mouth burnt ends.

The brisket is part of the chest muscle of the cow. Unlike other primal cuts, the cow uses this muscle a lot, which is why it requires a certain cooking technique to break down the connective tissue.

A full packer brisket is made up of two muscles: the point and the flat.

The point is the thickest part and its the fattier, more flavorful end of the brisket. It’s where burnt ends come from – which by the way are not burnt – they’re just covered with smoked on rub that gives them a burnt appearance.

Comparatively, the flat is the less fatty portion of the brisket that lays underneath the point. It’s where your traditional brisket slices come from.

When shopping for brisket at the market, you may notice a a variety of sizes to choose from. They often come packaged whole or trimmed as just the flat. It’s pretty rare to find just the point. If you do, grab a few.

How to Trim Brisket

In the past, I have taken my brisket out of the plastic, rubbed it and thrown it straight on the smoker, but that’s not the best approach.

Fat is flavor, but in the case of whole brisket, there is plenty of fat marbled into the meat. The added cap of fat is not needed. Instead, you want to remove the excess so the rub you apply will bark up next to the tender meat.

This above video will walk you through how to trim a brisket. All you need is a really large cutting board and a sharp knife. I love using my Cutco butcher knife, but a boning knife works nice, as well.

BBQ Competition Secret: Now that I’ve been smoking briskets for a while, I’ve learned that disposable plastic cutting boards work really well. I use them to trim all of my competition meats both before and after the cook.

The prep is probably one of the most debated topics when it comes to BBQ brisket. Some swear by injecting their meat for tenderness; others prefer to keep the meat “au naturel.”

You’re welcome to go either way, but I recommend trying an injection at least once. I think you’ll taste the difference. If you want to start simple, just inject the brisket with beef broth.

If you want do what the competitors do, combine 2 tablespoons of phosphates with 1 cup of beef broth. Phosphates help retain moisture. You can also add some rub to your broth, if the grains are small enough to fit through your injector.

It’s an oversized needle that you can pick up online. You fill a narrow cup with your injection liquid, stick the needle in the cup and pull up on the plunger to fill the vial with fluid.

Then, just like giving a shot, pierce the brisket meat, and slowly push down on the plunger to inject broth into the meat. Continue doing this every inch or so across and down the meat, using up most, if not all, of the liquid.

Next, rub your meat all over with your favorite BBQ rub. Rubs are as controversial as injections. In Texas, kosher salt and 16-mesh ground pepper are the staples. A few go on and add granulated garlic to that mix.

If you’re nervous about making your own rub, try my Brisket Rub. It’s available from Spiceology, and includes a balance of salt, pepper, garlic with a light touch of chiles, cumin and sweetness.

After you’ve (maybe) injected your brisket and rubbed it all over, rest your meat 6-12 hours in the fridge covered with plastic wrap. This allows all of that flavor you just added inside and out to really marry up with the meat.

Best Way to Smoke a Brisket

Some may consider this a lazy approach, but I don’t care. I have ruined too many briskets because I got distracted. You want to keep your heat at 225-250F. If you’re heat rises to 300F+ without you realizing it, you’re not going to be happy with the final result.

I load my pellet smoker with cherry and hickory pellets and set it to 225F degrees. Once it’s ready, I add the prepped brisket to the smoker fat side up with the point (the thickest end) toward the hopper, and close the lid.

If you’re short on time, you may want to try the hot and fast method. This is when you cook brisket at a higher temp. I usually only recommend this method if you’re using a high-quality grade of beef.

How Long to Smoke a Brisket

One of the most googled brisket questions is, “How long does it take to smoke a brisket?”

The answer for cook time will vary, depending on how much your brisket weighs, what temperature you’re cooking at and even your altitude and outside temperature.

I’ve had some briskets take 12 hours and some take 20. When you decide you want to smoke a brisket, I recommend adding it to the smoker early in the morning or even the night before.

For a general rule of thumb, a 11-pound brisket smoked at 225F degrees takes around 12 hours. That includes 6 hours before the wrap, 3 hours wrapped and a 3-hour rest.

Temperature is more important than time

When smoking a brisket, it’s more important to focus on the color and temperature. You’ll want to use a meat thermometer to monitor the temp of your meat throughout the cook.

First off, where you put the temperature probe matters.

The point part of the brisket will show a higher temp than the flat, because it’s fattier. If you remove the meat from the smoker when the point is ready, the flat will not be juicy and tender enough. Insert the probe in the flat about an inch from where the point and flat meet.

Once you put the rubbed brisket on your 225F-degree smoker, spritz it with apple cider vinegar every couple hours. When it reaches about 165F degrees and has a beautiful mahogany bark, spritz it some more and wrap the brisket tightly in two layers of foil or peach paper. For a 11-pound brisket, this can take about 5-6 hours.

Foil vs. Peach Paper: Foil is easier to come by and does a great job at locking in moisture, but people enjoy using peach paper because it allows some moisture to escape, preserving the beautiful bark you created.

You want to keep that thermometer in the meat, because this next temp is the most important part.

Continue cooking the brisket, until your meat temperature reaches 200-205F degrees. Some competition diehards swear by 203F degrees, to be exact. For an 11-pound brisket, this can take another 3 hours.

Another way to test the doneness is to pierce the probe into the brisket in multiple spots. If it glides in like butter with little resistance, it’s ready.

When You Pull It off the Smoker, You’re Not Quite Done – Let It Rest

After all of that hard work, I can’t stress how important this step is. You have to rest your brisket. Just think of this as part of the cooking process.

There’s a whole lot of science behind why this step is important, but to keep things simple –> this helps lock in the juicy flavor. Any step that locks in flavor is a good one. Right?

Remove your brisket from the smoker. Wrap it in one more piece of foil. Then, wrap it in a towel, and place it in a large cooler (without ice) for at least 3 hours.

How to Make Burnt Ends

Okay. At this point, you’ve been so disciplined and patient, but there is one more magical step for the best bites of brisket. Adjust the smoker to 275F degrees.

Remove the brisket from the cooler and foil, and cut the flat end off. Wrap him back in foil, and return him to the cooler.

Cut the point end into one-inch chunks. Throw them in an aluminum pan, and gently toss them with more rub and your favorite BBQ sauce. Place the pan back on the smoker. Smoke for 1 hour to set the sauce.

During the last 15 minutes of smoking, pull the flat out of the cooler, and slice against the grain. Sprinkle with more rub and brush with remaining juices. A sign of a well-cooked brisket flat is it’s flexibility.

If you can drape it over your finger, congratulations!

Finally, remove the burnt ends from the smoker and serve the crowd. If you follow these smoked brisket recipe tips and techniques, you should end up with the juiciest most flavorful brisket you’ve ever smoked.

Here’s a handy Girls Can Grill infographic to make things easier for you.