Hot and Fast Ribs
If you're running short on time but still want awesome barbecue, try smoking hot and fast ribs. You'll cut your time in half.
4.73 from 114 votes
Recipe Video Subscribe
277 shares

When you think of barbecue, you probably think about dishes that require you to watch over the pit all day long. With pork ribs for instance, most people follow the 3-2-1 method, which takes a good 6 hours.

There is an alternative. It’s called the hot and fast method. Instead of smoking slow and low, you’ll crank the heat to 300F degrees and smoke them for about 2 hours and 15 minutes.

This is a method that a lot of pitmasters use on the competition circuit, especially when they cook in drum smokers, because it shaves hours off the cook, so they can focus on other competition meats like brisket, pork butt and chicken.

The prep for hot and fast ribs is the same as it is for virtually all other St. Louis Style pork ribs methods. You’ll start by removing the silver skin off of the back and trimming away any excess fat.

Then, season your ribs. I like to use mustard as a binder followed by my award-winning Pork Rub. Be sure to rub both sides.

If you’re preparing these ribs for a BBQ competition where the judges will only take 1-2 bites, you may want to consider injecting the ribs. There are a lot of injection recipes out there. Most use a bottle of water, a couple tablespoons of an injection powder like Kosmos Q Moisture Magic or Blue’s Hog Pork Marinade along with a 1/4 cup of maple syrup or apple juice. Combine those ingredients and inject the meat right between the bones and let them rest overnight.

If you’re using the hot and fast method for competition, there are a few more trimming steps you’ll want to follow.

First, square off the bones by removing the end bones. Then, take a large knife and cut down the top side of the ribs where the cartilage lies, until the ribs are 4 1/2 to 5 inches long.

There is also a flap of meat on the backside that I trim away. Watch the video for more detail.

As with most barbecue, I start by cooking to color. What that means is that I’m looking for that moment when the barbecue rub begins to caramelize with the meat proteins and the fat to form a mahogany outer shell.

How to make sure ribs are tender

Once the mahogany bark forms, it’s time to wrap the ribs in foil with butter, brown sugar and a liquid like juice, soda or another mop sauce like Blue’s Hog Tennessee Red.

This is the braising stage. During this part of the cook, the meat will tenderize in the liquid, and because you’re cooking at 300F degrees, it should only take about 45 minutes. 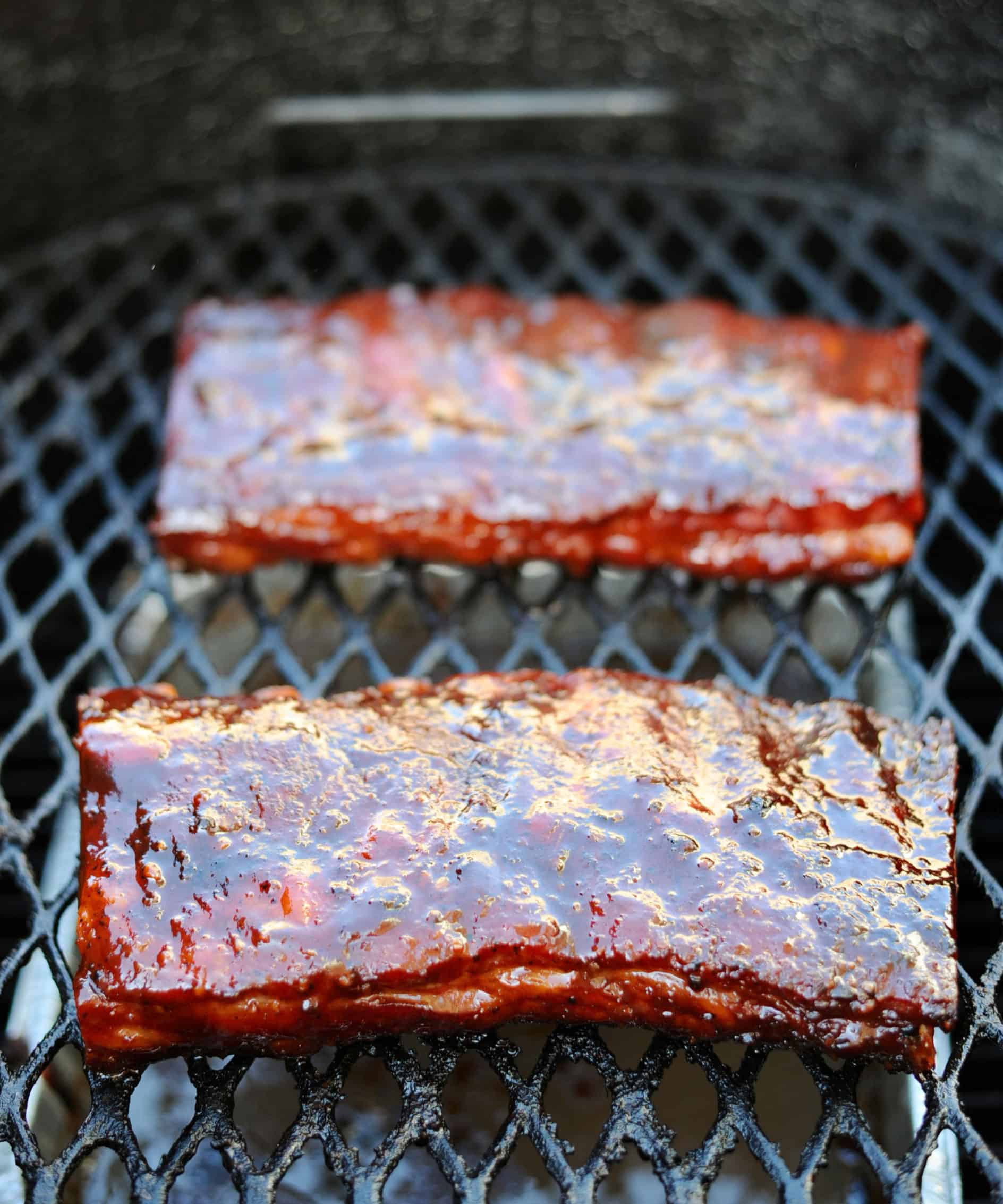 During the first stage, you built a nice bark, but some of it will become tender during the second stage. So in this final stage, you want to build that bark back up. Also, because the ribs are going onto the grill unwrapped, they’ll pick up more smoke.

Remove the hot and fast ribs from the foil and brush them with your favorite barbecue sauce. Then, place them back on the smoker.

How to know when the hot and fast ribs are done

Rib doneness is in the eye of the beholder. Some prefer fall-off-the-bone, while others like a little tug with their bite.

If you like a little tug, using a pair of tongs, grab the ribs in the center and pick them up. You want them to bend, and when you bounce them, they should just start to crack, but not break. The internal temp will be around 210F.

If you like them to fall off the bone, cook them a little longer so that when you pick them up, they almost break in half. The internal temp will be about 215F.

How to slice ribs

Let the ribs rest a bit, and then lay them so the bones are facing up. Using a long serrated knife like a bread knife, slice the meat between each bone.

By having the bones facing up, you’ll be able to see exactly where to slice. Sometimes the bones will be crooked, so don’t always expect a straight cut.

Before serving them, you can brush them with a little more sauce, if you’d like.

Sides that go great with hot and fast ribs

Nutritional content will vary, depending on how much mustard, sugar, honey and BBQ sauce you use.

This estimate was created using an online nutrition calculator

How to Smoke Baby Back Ribs

Hi. I’m Christie, the head cook and award-winning competitive pitmaster for Team Girls Can Grill. I have won multiple grand championships and have dozens of top ten category finishes. People know me as the girl who is forever hovering over a grill, smoker or campfire with tongs in one hand and a glass of wine in the other.