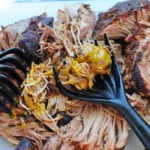 Mopping the kitchen sucks, but mopping a pork butt with a tangy vinegar sauce to create Carolina Pulled Pork is a chore I’m down for.

Which pork cut to use

The best meat for pulled pork is pork butt, which may also be called Boston butt or pork shoulder. It seems confusing, but pork butt doesn’t actually come from the hog’s rear. It comes from its upper shoulder.

You can find it bone-in or boneless. For this recipe, it doesn’t matter which one your choose. The bone-in will enhance the flavor, but it will take longer to cook compared to the boneless butt.

When picking through the meat case, read the label closely. Pork butt is often cased next to the pork picnic, which may also be called picnic shoulder. It’s cut from the lower part of the hog’s shoulder, closer to the leg. You can cook a picnic slow and low, too, but it won’t turn out exactly like the pulled pork you’re used to.

There are honestly several ways to make pulled pork, and even Carolina pulled pork varies regionally from South and North Carolina. My recipe is a convergence of the tastes of the Carolinas that I love – vinegar + mustard.

Before I learned to grill, I used to use a Paula Deen recipe to make traditional pulled pork. It cooked in the oven in a covered pot with sliced onions. I’ve also used the slow cooker a time or two. But now, all of my cooking is pretty much done outdoors on the grill.

With traditional smoked pulled pork, you usually rub the meat, smoke it, braise it and brush it with sauce.

With Carolina pulled pork, you baste it throughout the initial smoking period with a vinegar-based mop sauce. The vinegar pairs with the sweetness of the pork and adds tremendous flavor to the meat that you just don’t get from smoking alone.

Then, instead of finishing it with a sweet red BBQ sauce, it’s dipped in more of the mop sauce or Carolina Mustard BBQ Sauce.

How to Smoke Carolina Pulled Pork

This step is optional, but I find to get really juicy meat, it helps to inject it with some of the mop sauce. I like the OXO flavor injector, because it has a large enough needle for any big chunks of seasoning to pass through.

Every good butt deserves a good rub – sorry I couldn’t resist. I always use a generous amount of my Pk Rub all over the butt. Let that rest on the counter while you fire up your smoker.

You can set your smoker anywhere between 225-275F degrees. Mild woods or wood pellets like pecan and apple go great with pork.

If you smoke it at 225F, it will obviously take longer to cook, but it will pick up more smoke flavor. I personally like to cook my Carolina pulled pork at 275F. I find it has plenty of smoke flavor and cooks significantly faster.

Every hour or so, gently brush the top and sides of the pork butt with the mop sauce. Remember, this is your flavor enhancer.

If you smoke the pork at 275F, somewhere around the 4-hour-mark, you will see the outer surface of the meat start to harden and turn a rich mahogany color. This means it’s time for the braise.

Place the pork butt in a large aluminum pan, and pour the rest of the mop around the edges. Cover it with foil, and return it to the smoker.

Continue cooking it, until the internal temperature of the meat reaches 197-203F degrees. Anywhere in that window is good. Depending on how large your pork butt is and the temp of your grill, this could take anywhere from 2-4 more hours.

Once your pork butt reaches temp, pull the pan off the grill and let it rest for a good 30-60 minutes. Then, grab some meat shredding claws and pull the meat apart.

You can serve your Carolina pulled pork plain or with sauce, but for the full Carolina experience, I like drizzling the meat with Carolina Mustard BBQ sauce.

Pile it high on a plate or on a bun with a big dollop of coleslaw.