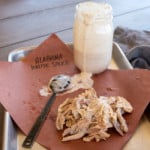 Pin this recipe for later

What is Alabama White Sauce

When Americans think of barbecue, we often think of sweet and smoky red barbecue sauce, but in one region of America, white BBQ sauce is king.

Pitmaster Robert Gibson (AKA Big Bob Gibson), created the tangy, peppery sauce in the 1920s and began serving it on smoked meats in Decatur, Alabama.

I’ve had the pleasure of judging the Jack Daniel’s World Championship Invitational Barbecue with Chris for a number of years.

In 2009, he published Bib Bob Gibson’s BBQ Book, which includes a recipe for Alabama White Sauce, but even the book describes that the recipe has changed slightly over the years as the original version has been passed on to different cooks at the restaurant. He said the version in the book is one of his favorites.

You can also buy Big Bob Gibson’s Original White Sauce by the bottle.

Although it’s white with a foundation of mayonnaise, it’s not sweet like the dressing you put on traditional coleslaw or broccoli salad. It’s more savory with a tangy punch from the vinegar and a subtle heat from the horseradish and cayenne.

It also has coarse-ground black pepper that stands out in contrast to the white sauce. That adds pops of peppery notes that complements barbecue really well.

What is Alabama White Sauce Good on

As you can see in the video above, they smoke 70 chickens at a time. I imagine you’re probably only smoking 1-2, which is why my recipe is scaled down to make a 2 1/4 cup batch.

How long can you keep Alabama White Sauce

When left at room temperature, the sauce needs to be consumed within two hours. This includes if it’s mixed in salads like my kale coleslaw or simply served on the table in a jar for guests to spoon right onto their meat.

If you properly store it in an air-tight container in the refrigerator, it will keep for a couple of weeks.